Safest Airlines in the World: A Deep Analysis To Find the Truth

Some airlines are more famous for their high level of safety.

Other instead are more known for their lack of safety.

Of most airlines we know their level of comfort, but few passengers really know how safe they are.

It is time to talk only about safety and understand which is the safety airline on the world.

The most known safety ratings are those done by Airlinratings.com.

Their ratings are quite realistic because based on data gathered from 435 airlines, but I will show you how they are not enough to understand which one is the safest.

Audits from governments and the airlines, make up most of the information that Airlineratings.com uses. 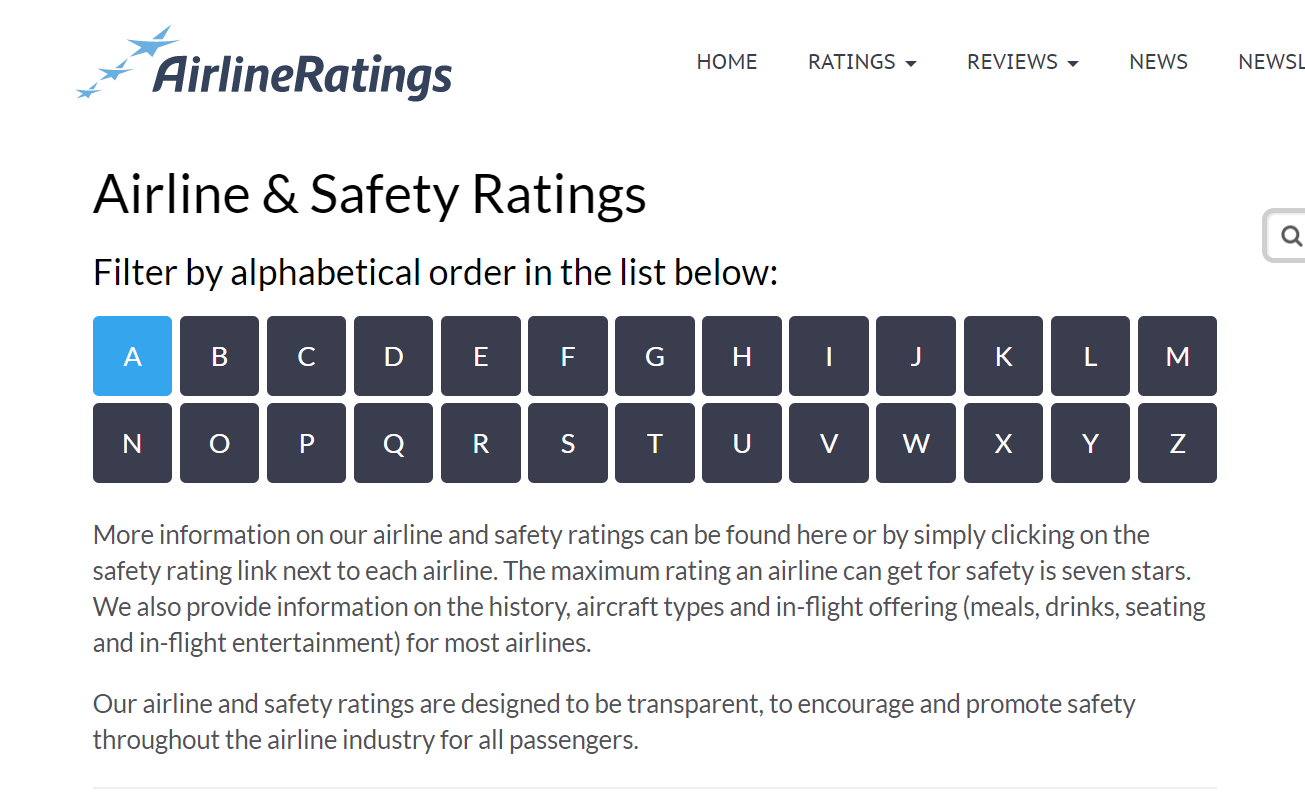 Often I have been asked which is the safest airline in the world and this question comes from the fact that many passengers don’t consider comfort as the main unit to decide which airline they will fly with.

A lot of passengers are more interested in safety.

Online you can find many passengers asking questions about airline safety and most people have different opinions.

So we have to find a way to get to the truth and understand how safety in aviation works.

Let’s see which are the safest airlines in the world according to Airlineratings.com and let’s see how to recognize safety standards.

Safest Airline in the World

According to Airlineratings.com these are the safest airlines in the world:

These are some amongst the safest airlines in the world.

These ratings are based on deadly incidents in the last 10 years and other safety audits that all companies have to do.

If an airline has certain standards according to the international regulations then Airlinratings.com will give 2 stars if the airline has a IOSA certification. If the airlines doesn’t appear in the European black list, then 1 star is given.

If there were no deadly incidents in the last 10 years, 1 star in given to the airline.

Found out the details at this page.

How much can we rely on these ratings?

According to me, not so much.

These ratings are not fully reliable because some information is missing: we cannot just rely on the data provided to Airlineratings.com.

We need other kind of information that is difficult to get, but it’s the most important.

The most important information is the one that airlines don’t let leak so easily out of their offices. It is the number of small incidents that almost everyday an airline is subject to.

Airlineratings.com said that this type of information is not easy to get and for this reason they cannot rely on it for building their ratings.

This is true, it is not easy. One can get to know certain bad practices in maintenance only if someone will tell you, but most people don’t speak and reports don’t go out so easily.

What we have to keep in mind is that these small incidents happen almost daily and they are the result of something not working well inside the organization.

These small mistakes can lead to big disasters, if no action is taken from the airline then something bad will happen.

This is the best way to get to know how safe the airline really is.

What is the difference between safety standards and safety?

I want to tell you why I think it is important to know which kind of small incidents happen more often in an airlines’s organization.

It is related to “safety standards” and not just “safety”.

Safety standards describe more clearly what are the practices that people follow in an airline that bring to high levels of safety.

You see the difference between “safety standards” and “safety”?

If we could walk in the offices of an airline or in their training centers, we could really understand what happens. We could see the bad practices, but also the good ones.

We have to ask ourselves these 3 questions:

1. Are we sure that the reputation of an airline will decade after one deadly accident?

2. If before December 2017 Qantas will have an accident, next year it will not be the safest airline anymore?

3. We are really classifying airlines according to the number of dead people they can count?

These parameters cannot define the safety of an airline… I will tell you what does.

How to classify an airlines safety?

All airlines are safe and all are not!

This is the ugly truth.

Except for the airlines on the black list, all the others face the same risks and all have good procedures for reducing the effect of these risks.

For example, if the pilot of a Boeing 747 of Qantas is having a difficult moment in his life, he’s divorcing and not sleeping enough, the risk (stressed and tired) of having him on an airplane is as high as having any other pilot from Turkish Airlines or Emirates that are living the same situation.

The same idea can be applied to other people working in an airline doing different jobs that have high levels of risk (maintenance, supervisors, training).

I wouldn’t consider Airlinerating’s classification as the only truth, but more as a good starting point.

What’s your idea on this?